On its well-trodden slopes, Snake Mountain holds stories of beasts, ruin and tragedy

The heart of Addison County is aged and well worn. Past the pumpkin spice storefronts, oreo cows and paint-chipped houses dotting the hills lies an ancient site with stories to tell. It is the color of rain-dampened sugar maples and ginger leaves, trampled to a fine pulp on the forest floor. It smells of moss and walnuts left to rot under a blanket of fresh snow. The heart of Addison County is fire-singed and beaten by the steel-toed boots of men, unaware of the clouds grimacing from above. We call it Snake Mountain. Locals call it cryptic, beautiful and home.

Snake Mountain was once an island, proudly lifting its bouldered chin above the waters of Lake Vermont, the massive glacial lake that covered Vermont after the last ice age. Thirteen-thousand years later, the waters have receded, and the lake floor has turned to clay and sprouted trees. Snake Mountain remains, towering nearly a thousand feet above the valley below. On some misty mornings, the clouds create a ghoulish silhouette of the old lake, forming puddles in ravines and turning houses into sailboats.

In the 19th century, wide-eyed visitors flocked to Vermont’s verdant hills. City folk gazed out at the Champlain Valley, believing that the clean mountain air would cleanse their bodies of ailments. Mountain-top sickhouses were built throughout the Green Mountains and the Adirondacks, where tuberculosis patients were taken to rest and forced to sleep outside in the frigid air, wrapped under heavy blankets.

Under the weeping pines and sunburnt maples of Snake Mountain, the heavy hooves of oxen serenaded Jonah S. Smith as they dragged saw and grist mills to the peak. By 1870, these mills yielded enough timber to erect the Grand View House. Once the red ribbon finally fell, the hotel was an oasis from which businessmen could unwind and marvel at the forests below. For a brief time, the mountain was renamed “Grand View Mountain” after the establishment that sat upon its peak like a misfitted top hat. Unsurprisingly, the name “Snake Mountain” was bad for business.

For over 20 years, Jonah S. Smith ran one of the most celebrated summit houses in Vermont, hosting celebrities, authors, botany classes, school teacher retreats and church picnics. In the age of Emerson and Thoreau, American romantics paid sums to see the sun set over the distant Adirondack peaks.

Nevertheless, as the leaves fell and the songbirds fled for winter, the Grand View House slowly withered away. In the 1920s, Mrs. Mary Pond Smith and her son Seward ran the hotel. In those years, summit houses that once crowned Vermont’s highest peaks began to lose customers, as a result of Long Trail cabins’ increasing popularity. Additionally, in the age of automobiles, the long, steep drive to the hotel became a nuisance. Beginning to grow restless, Mary and Seward Smith could only watch as the stream of customers slowed to a trickle, and in 1925 the Grand View House shut its doors forever.

The process of decay was nightmarish: the Flood of 1927, according to research by Edna Holzschuh, “converted the road into a gully,” rendering it unusable. The unearthed roots of fallen trees lay like brown snakes among the ferns. Upon hearing of the Grand View House’s closure, looters ransacked the abandoned structure, taking whatever furnishings were left. The hotel was gutted and left at nature’s mercy – but nature showed none.

In the following years, a hurricane battered the building and toppled its 74-foot watchtower, which had once cost guests 10 cents to ascend. What was left of the hotel’s corpse burned to the ground, and the mountain gradually reclaimed the rotten timber that Jonah S. Smith had once taken, years ago. For years, Snake Mountain fell into a quiet slumber.

The mountain assumed a silent and eerie presence, casting its long shadow over the valley. Rumors began to circulate about a hideous and reclusive creature in the Wilmarth woods. As the story goes, the menacing beast would dwell behind barns and houses on the mountain, hiding in canopies and waiting for the moment to pounce.

In the 1930s, one woman was driving home and noticed a shadow emerging from the trees behind her vehicle. Her gas pedal pushed firmly to the floor, she sped down the dirt road. The creature took chase, and was astonishingly able to keep up with the terrified woman. Desperate, she pulled over at a nearby farmhouse. The beast leapt onto the roof of the vehicle, clawing viciously. The elongated wail of her car horn got the attention of the farmhouse residents, and some women came outside to inspect. Reportedly, the women shrieked at the sight of the creature and retreated immediately back into the farmhouse. When the men of the house finally emerged with their shotguns the beast had vanished. Though the creature was sighted many times, frightening local children and families and always evading capture, no visual descriptions are to be found. The so-called “Black Beast of Snake Mountain” remains an enigma, embedded in local lore.

It must be said: some historians say it is highly likely that, in rural Vermont in the 1930s, the “Black Beast of Snake Mountain” was the manifestation of racist beliefs that were probably held by many white locals at the time. There is no concrete evidence of this being the case but, nonetheless, it is worth noting.

Snake Mountain returned to its peaceful state as the Grand View House faded into memory and the land became a popular hiking destination. Sunlight gleamed once more through the branches. Sparrows chirped amongst themselves about forgotten men. The winding road that originally led to the mountain-top hotel embraced its role as a gully, and dirt paths emerged alongside it.

The hotel’s rugged foundation remains, upon which locals and college students recline to enjoy the magnificent views — the same views enjoyed by decades of travelers, writers, and school children. Few bat an eye at the cement slab, and fewer still ask questions. There is a rumor that is promoted, uncited, by the Snake Mountain Wikipedia page, claiming that the foundation is not that of the hotel, but of a house built by a young man who died overseas in a car crash, never finishing construction. History has become uncertain as the years have passed.

As winter approaches, the mountain has begun to grow weary. Dense fog has given Wilmarth woods a ghoulish intensity. On wet, cloudy mornings, the trees watch anxiously as frost creeps upon their roots. At the trailhead sits a red structure, paint-chipped and lonely. Some claim to have seen figures in the windows, glaring down at them, and crusted mason jars filled with strange liquids.

Today, the windows are boarded up, but the stories remain. On Snake Mountain, history is found in every footprint, sign, and leaf, oozing through the woods like sap, dark and sweet. 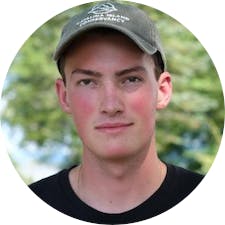