As a Muslim-American woman growing up in the shadow of post-9/11 Islamophobia and the War on Terror, I am no stranger to the stereotypes perpetuated in Western media against Muslims, especially Muslim women. Renowned playwright and actress Rohina Malik’s one-woman play “Unveiled” breaks down these stereotypes and the harmful impact they have on the Muslim community, and works to produce a much needed counter-narrative.

Malik performed “Unveiled” on March 7 at the Wright Memorial Theatre. The play was co-sponsored by the Charles P. Scott Center for Spiritual and Religious Life, the Middle East Studies Department and the Center for Comparative Study of Race and Ethnicity, and was one of the last installments in Middlebury’s 21st Century Theatre Festival. Associate Professor of Theatre Claudio Medeiros and Assistant Professor of Theatre Michole Biancosino were motivated to organize the festival by a desire to bring diverse theater voices from New York and Chicago to Middlebury. They specifically chose to feature “Unveiled” in order to give audiences  an opportunity to “see themselves onstage and give other students insight on experiences [of people in the Muslim community] without putting the onus on Muslim students on this campus,” Biancosino said.

Indeed, for many students, Muslim and non-Muslim alike, Malik’s performance was one of their first times seeing a veiled Muslim woman acting on stage. Furthermore, for many Muslim-Americans, watching Rohina’s play is one of the only times they have seen themselves represented positively and accurately within the media, a problem which Biancosino acknowledged, calling it a “hole in the theatrical canon.”

Audiences of “Unveiled” were invited to drink a cup of tea before the show started. In this way, the audience was able to immerse themselves fully into the content of the play, in which Malik told the stories of five different Muslim women — all veiled, but from very different ethnic and familial backgrounds — through monologues over cups of tea. Each cup of tea held cultural significance for the characters in the play and thus acted as a common thread tying the stories of all the main characters together. The drastically different ethnic backgrounds of the characters in the play showcased the breadth of the Muslim diaspora in the United States and served to offset the misconception that the Muslim-American experience is monolithic.

“Unveiled” was first produced and performed at the 16th Street Theater in New York in 2009. Since then, Malik has travelled across the country and around the world, performing “Unveiled” in a variety of different venues, from theatres to universities to mosques, churches and more. Malik herself emphasizes while this play is centered around Muslim experiences, it is relevant for people of all backgrounds. She explains that ultimately, her mission is to educate people and combat ignorance. Thus, she finds it necessary to perform her play in as many different places as possible, and that getting to witness moments of enlightenment felt by her audience members makes the hassle of traveling while Muslim “worth it.” Indeed, for Malik, one of the most powerful aspects of theater is the connection created between the actor and the audience as they experience the play together. “Theatre is sacred because it’s live,” she said.

Over the course of the one-hour long play, Malik packs in a lot of social commentary. She dives headfirst into topics such as sexual assault, hate crimes, bigotry, feminism, racism, colonization and so much more. “[Unveiled] is a great play for having a conversation about the state of politics in America,” Biancosino said. The stories featured in the play, Rohina explained, are inspired by true events, both experiences of her own and experiences of her friends and the greater Muslim community. Rohina wrote the play out of a desire to share these experiences with others.

Saturday night’s showing of “Unveiled” was not the first time Middlebury students were exposed to the play. There were some students in the audience that had previously read “Unveiled” as part of their class “Contemporary Women Playwrights.” Wengel Kifle ’20 was among these students. According to Kifle, her class had mixed responses to the play, some saying that its structure differed too much from their expectations of theater, given its monologue format and minimal narrative. However, for Kiffle, both reading and watching the play was a powerful experience. “[I] was already aware of a lot of the hate delivered upon the Muslim community in the United States and in general after 9/11,” she said. “[I] hadn’t had a lot of exposure to the personal pain that the Muslim community was going through and the emotions behind all of that.”

Within the context of this play, the concept of the veil refers to the ignorance many people have towards the Muslim community, and the blind hatred that stems from it. In the last scene of the play, Malik’s character begs a character that committed a hate crime against her to “remove the veil from [his] heart”, and ultimately, that is what she allows the audience to do as well. 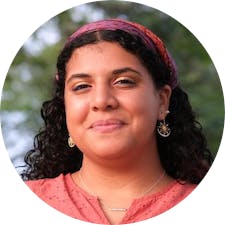